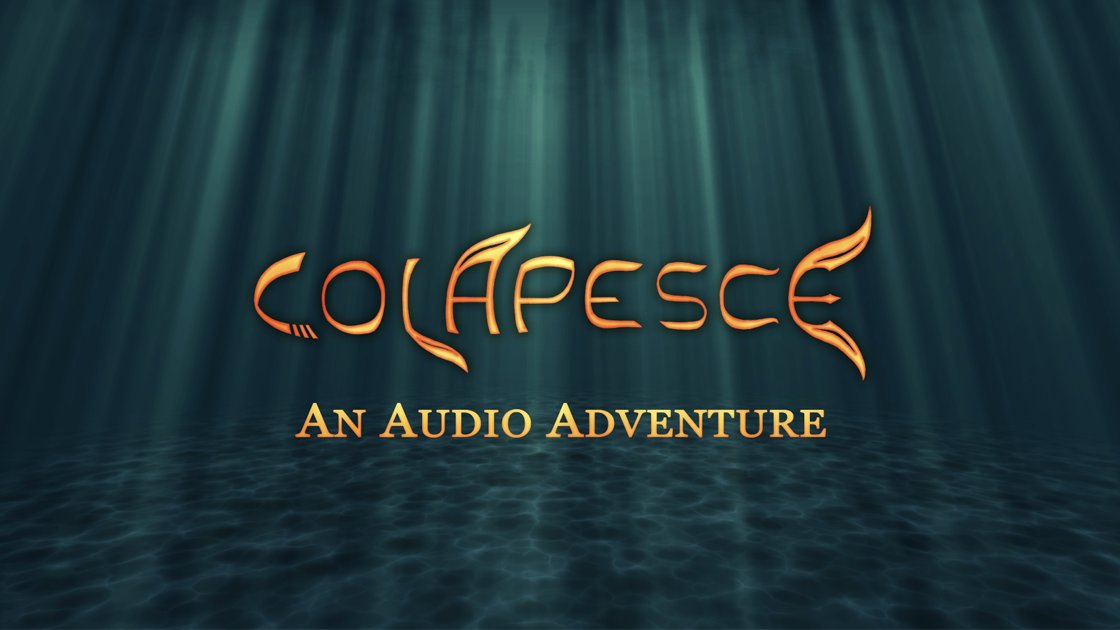 TOO MUCH WATER WILL TURN YOU INTO A FISH...

Colapesce: An Audio Adventure is a listening experience for the entire family. Featuring new and returning Trinacria artists, this full-cast album brings the tale to life with original music and the same playful spirit of the original stage production. Adapted from Trinacria's 2016 performance La Storia di Colapesce, which audiences in Italy and the USA called "enchanting," "fantastical," and "an amazing, inspiring, one of a kind performance." New England Theatre Geek said Trinacria's "message of giving life to myth in ordinary people packed a powerful emotional punch."

Our tale takes place long, long ago in a time of disasters: earthquakes, tidal waves, storms, and volcanic eruptions. In the harbor city of Messina lives a young boy named Nicola, the son of a fisherman who swims so much and so deep that he earns himself the nickname “Cola the Fish”. Cola spends all his days in the sea, despite his mother’s constant warnings that “too much water will turn you into a fish!” One day, the Princess goes out in search of this mysterious fish-boy, hopeful that he will be able to help her discover what dark secrets lie beneath the Strait of Messina.

Cola dives deeper and deeper to the bottom of the Strait, encountering sirens, sea monsters, and a legendary kingdom ruled by a mysterious and powerful king. As the secrets of the sea are revealed to him, Cola finds his beloved island of Sicily faces a more terrible danger than he could have ever imagined.

ABOUT THE LISTENING PARTY

Purchase your ticket to the virtual premiere on Viewcy and join the listening party! The whole family can listen together for just $10.

Worried you won’t be able to listen to the entire broadcast in one sitting, or prefer to download and listen later? Don’t worry! You will still have continued access to the Viewcy page after the event for repeat listening and downloading. That means you can have Colapesce with you for long car rides or rainy days.

As a premiere attendee, you will also gain access to an exclusive interview with the creative team, hosted by Iyvon Edebiri of the Parsnip Ship Podcast Play Company.

After the premiere on October 10th, the full audio file will also be available as a download for $12 through Viewcy or directly through Trinacria Theatre Company’s website.

Trinacria Theatre Company is a 501(c)(3) nonprofit. Like many performing arts organizations, COVID-19 has been a difficult time for our team. All proceeds from the sales of Colapesce: An Audio Adventure will support the creative artists and future touring of the stage production.

Trinacria Theatre Company uses the arts to build bridges in a world that would build walls. Our company believes that we can connect communities and places across the world with the power of creative storytelling.

In the summer of 2016, Trinacria Theatre Company members spent one month in residency in Messina, Sicily, living within the local community and learning the little-known local folk legend of the fish-boy who saved Messina. The bilingual production was toured through Sicily, NYC, and Boston, and featured on Italian national broadcaster Rai Italia and Rai International.

In this time of distance, when we've had to put our plans of touring the production on hold, we've instead found ourselves reimagining what this moment could be: a chance to bring this little-known and powerful tale right into the homes and hearts of audiences all over the world.

Your guests will need a ticket to attend this event. By default we’ve created a free ticket called “RSVP.” You can edit this ticket, or replace it with a paid ticket in Details / Tickets.